What to Look for When Buying a British Bulldog Puppy

British Bulldogs are one of Australia's most loved breeds. This popularity attracts them to inexperienced and unscrupulous breeders. So how do you know the difference between a responsible and irresponsible breeder?

The results are recorded on the ORCHID database.

Like in all dogs, there are specific health issues, and it’s important to make sure your breeder does the recommended health testing for their breed. This could be the difference between a happy and healthy puppy and a poorly bred one.

In this article we spoke to Narelle Spencer, a Dogs Australia registered breeder of 34 years, who breeds healthy British Bulldogs under the kennel name ‘HEFTY’, on what to know when you are considering a British Bulldog puppy as your new best friend.

What is a healthy British Bulldog?

Dignified, kind, friendly, courageous and calm, conveying an impression of determination, the British Bulldog is a well-known breed and considered a national icon in its home Country of England.

Narelle works as a certified vet nurse of 24 years and is the lecturer for the British Bulldog at Dogs New South Wales for aspiring judges. Narelle has worked as an animal trainer in the Australian film and television industry for the past 30 years.

What health testing should breeders be doing?

There are a range of health tests recommended for British Bulldogs.

It is strongly recommended that Dogs Australia registered British Bulldog breeders test for the following health conditions in their breeding stock. Most dogs are tested between 12 and 18 months. 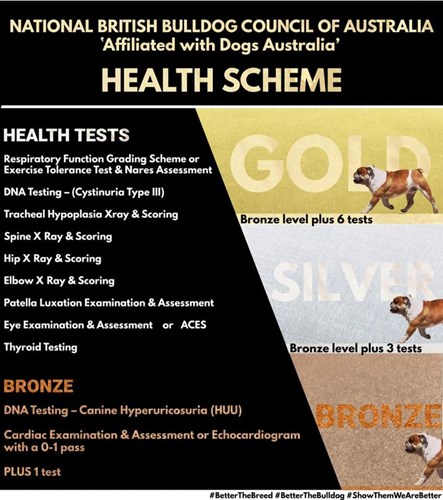 “Lots of individuals already do the testing, but now with the breeding scheme, we will be registering the results on the Dogs Australia ORCHID database and can recommend to clubs certain test that should be mandatory.”, Narelle said.

“There’s been an extensive study by Cambridge University on Brachycephalic Obstructive Airway Syndrome (BOAS) and the influence of Stenotic Nares on BOAS.”

“We're led to believe every Bulldog has BOAS, and that is not true. The ones on the televisions are showing severe symptoms.”

“We can provide images to vets of open, mild, moderate and severely stenotic noses.”

Narelle would like the Exercise Tolerance Test to be mandatory and see more vets able to collect data for the new British Bulldog health scheme.

Narelle has competed in Obedience and Agility with her British Bulldogs.

“It’s amazing what they can do, Rally and even Tracking and Drafting.”

The head shape of a dog is believed to cause airway issues, however, a study shows it’s not exclusive to brachycephalic breeds.

The Norwich Terrier has a mesocephalic head shape and is affected with Upper Airway Syndrome (UPS), which clinically presents itself the same as BOAS.

A genetic component discovered from the Norwich terrier called ADAMTS3 is found in British and French Bulldogs, giving hope of a DNA test.

“Most people’s pets like Poodles, Labradors and Beagles, have mesocephalic skulls so you don’t expect them to have airway obstruction issues.”

“It’s not head shape, and this study is a solid example that it may not be head shape.”

The Norwich Terrier who was separated from the Norfolk Terrier, doesn’t suffer from UAS, suggesting a genetic nature.

Narelle is pleased with those new to breed being keen on health testing.

A misconception exists that those breeding to a standard don’t consider health.

“Dogs bred to breed standard are significantly healthier than those with very heavy wrinkling and off standards colours.”

“We go back five generations, sometimes more, to decide what breeding line to use.”

Health is not something considered highly in unregulated breeding.

“In the past, I desexed and got surgery on any dogs with elongated soft palates and placed them in pet homes. I haven’t had any palate issues for the last 20 years.”

What are the concerns for British Bulldogs that don’t meet their breed standard?

There are concerns with dogs sold as British Bulldogs who have off-standard colours and coats sold for large amounts.

“The merle, long-hair and hairless gene does not exist in British Bulldogs, so people are thinking they are buying a purebred when it isn’t.”

Narelle is concerned with the number of off-standard and unhealthy dogs she sees in her workplace, who are bred despite having serious health concerns.

Before buying a British Bulldog puppy it’s important to do your research.

From getting a dog to keeping them happy we will have you covered at dogsaustralia.org.au